Will Australian Boards learn from the Pandemic? 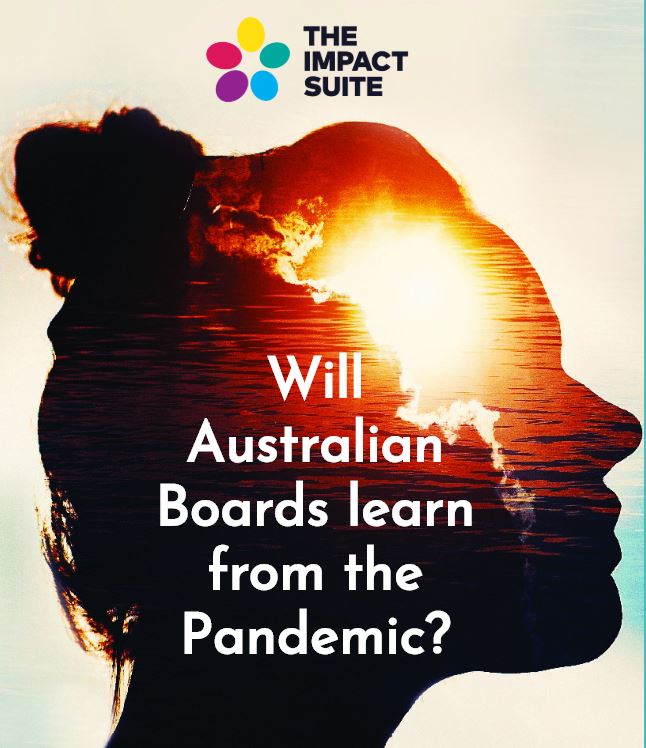 Will Australian Boards learn from the Pandemic?

In March 2020 The Impact Suite released its review on both for-profit and not-for-profit organisations for their actual action (and not intent) on promoting women to boards. The release was timed for International Women’s Day and including interesting results such as for every 100 men who are promoted or hired to a manager role only 72 women achieve the same result.

In Australia women make up 30.7% of Board Directors on ASX200 companies and 26.8% of all companies. There are 34% of Boards and governing bodies with no female directors; 1 in 3 companies with no women on the board. Compare this to only 0.9% with no male directors.

Leadership during the Pandemic

Whilst the world continues to battle with the pandemic and the health and economic impacts will continue for some time yet, a lot of commentary is occurring globally about the differences between the leaders of various nations. Some of the headlines include:

·        “Why women leaders are excelling during the coronavirus pandemic”

·        “Are female leaders more successful at managing the coronavirus crisis?”

Shelley Zalis from NBC news sums up the reasons in her article saying:

“When we look at the global response to COVID-19, female leaders are shining. In many cases, it was women who acted before anyone else.This typically comes naturally to us: We are nurturers and communicators, we put the collective good before our own self-interest and we know how to be empathetic and decisive in equal measure. The oft-overlooked skills that women bring to the table are becoming very visible — in fact, they’re emerging as the greatest strengths for leadership today.”

What do the numbers say?

The statistics for countries led by women are quite staggering when it comes to the pandemic. European countries such as Denmark,led by Prime Minister Mette Frederiksen, Germany, led by Angela Merkel, and Finland who is led by 34 year old Sanna Marin are all well below the deadly statistics of their neighbours such as the United Kingdom, Italy, France and Spain.

Analysis conducted by Lorenzo Fioramonti from the University of Pretoria and Luca Coscieme from Trinity College in Dublin on the continuous daily data of the number of confirmed Covid-19 deaths for 35 countries during the period 31 December 2019 to 11 May 2020 provides informative insights as follows.

Why have women leaders outperformed men?

According to further analysis done by the Irish Research Council found that countries with female leaders shared similar approaches to the crisis. These approaches included the following characteristics:

By comparison, the analysis found male led government downplayed warnings in the early stages and acted with significant delays in their response to the crisis.

The research also considered income and economic comparisons and found countries led by women tended to be more equal on income distribution. They further determined women-led countries are less likely to suffer from the ensuing economic recession with forecast GDP decline of less than 5.5% for female-led countries versus 7% for male-led countries.

In the Impact Suite’s review in March we provided the following chart which shows on average women are more educated than males, in Australia, yet the proportion of women in senior roles is significantly lower.

Research conducted by the Centre for Gender Economics and Innovation and Infinitas Asset Management found that top Australian companies with at least 25 percent of their board directors being female performed more than 7 percent better than those with all-male boards. Further insights shared by Women on Boards found that United States companies with higher numbers of female board directors delivered higher return on equity, higher return on sales and a higher return on invested capital. Starker is the percentage of out-performance which was detailed as follows:

For ASX500 companies the results for companies with women directors was 8.7% higher Return on Equity over a five-year period compared to those with no female directors.

Australia’snot-for-profit sector is doing fairly well when it comes to gender diversity of board directors and to some extent Board Chairs. This is a positive sign for Australia but there is a long way to go in the for-profit sector.

Female leaders have emerged as a benchmark for what competent leadership looks like during the pandemic and this is justly receiving recognition globally. The pandemic has provided everyone with an opportunity to rethink what they do and how they do it. Whether it is changing processes, reducing the cost of physical office space by leveraging working from home or changing an obsolete view of what makes a leader.

As with every other aspect of our lives, we should each take a moment to consider how our views and practices should change for the better.  Harvard Business Online asks this question in their recent article:

“Will our post-covid world say goodbye to our persistent preference for tough, bold, and reckless leaders, primarily male and obsessed with themselves? Will we be mature enough to adopt a more balanced perception of leadership talent, one based more on increasing group welfare than on individual showmanship?”

The best performing leaders during the pandemic may very well be the first significant wave of highly visible role models for this generation and those to come. We have an opportunity to redefine what we look for when choosing leaders for our organisations and for our levels of government.

The Impact Suite hopes everyone may become less surprised and more accepting of leaders chosen on their expertise, intelligence, curiosity, humility, empathy,and integrity. Though only time will tell if this new narrative survives the crisis, we hope it will. It would not just elevate the overall quality of our leaders — it would likely increase our trust in the result of our choices.