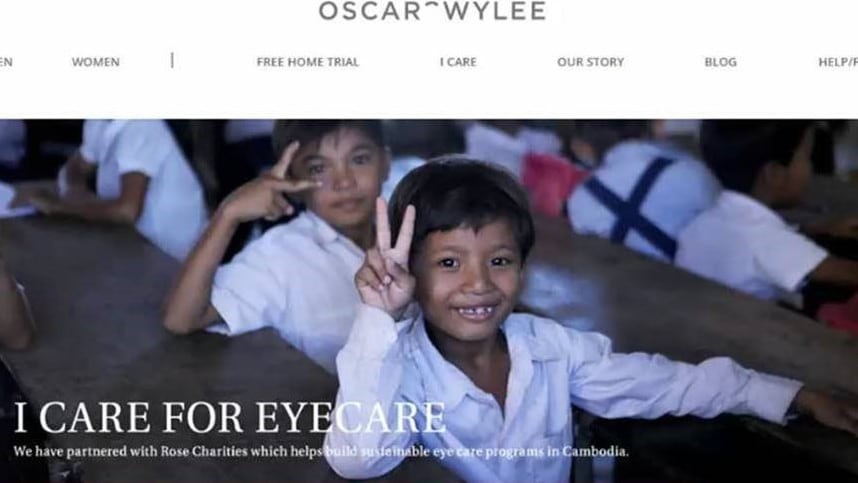 A $3.5m fine was issued to eyewear retailer Oscar Wylee for misleading or deceptive conduct over a 5 year period for making charitable claims. Rose Charities were named as the beneficiary of a long standing campaign by the company, despite only receiving a $2,000 cash donation and one tenth of what was promised in public campaigns.

In social media posts,emails, web promotions and other merchandise, Oscar Wylee said they would donate a pair of glasses to someone in need for each pair people purchased.Their campaigns included claims of “One for one. All the time. Forever. We donate a pair of glasses to those in need for every pair purchased” and “Buy a pair, give a pair”. But they didn’t do this.

Rose Charities have a 20 year history of sustainable development. The projects in Cambodia began in 1998 with land-mine, cleft-lip and palate, and eye surgery. The charity’s projects now include education support, holistic physical rehabilitation, as well as the original eye and rehabilitative surgery.

Oscar Wylee claimed to support the charity via marketing campaigns which generated sales of 328,010 pairs of glasses over a 5year period; which would lead any consumer to believe the same amount being donated. But only 3,181 frames were donated to the charity (without lenses).This was more like 1 pair of glasses for every 100 sold.

In the court case, Rose Charities confirmed they only received a $2,000 cash donation along with 100 frames in 2014. Despite Oscar Wylee’s claims of support through until late 2018– Rose Charities had received nothing further.

This was a far cry from the 1:1 claim, and multi-year support.

What charities and NFPs can do when companies don’t donate

Charities and not-for-profits have many and varied relationships with donors and businesses. This is part of delivering on their mission, and thinking differently about how to attract funding and resources from different sources. However, this doesn’t mean that these relationships shouldn’t be managed tightly.

In the first instance,charities should have good dialogue with their corporate donors. If the corporate entity is using the charity’s brand as part of its own promotion, the charity should have some sort of agreement in place which spells out what rights are granted and in exchange for what gain. Think of it like a sponsorship agreement.

This then provides both parties with clear parameters and therefore expectations and potential recourse. Recourse may be the ability to end the agreement, or seek financial damages.

In the Oscar Wylee case, the ACCC Deputy Chair said “Oscar Wylee promoted its charitable activities as a core reason why consumers should buy Oscar Wylee glasses, but its claims were false and were made in circumstances where consumers could not easily verify these claims for themselves.” This puts the charity’s reputation at risk when customers of Oscar Wylee consider any impact report from the charity.

If charities are unable to resolve an issue with a donor company, and the company is making false marketing claims, then they should report any potential misleading or deceptive conduct to the Regulator.In this case it is the Australian Competition & Consumer Commission.

On the Oscar Wylee case, the ACCC said “This penalty should serve as a reminder for any company considering making false claims to its customers in its marketing material,whether online, by email, on video, on social media or in store.”

In addition to imposing penalties, the Court also ordered Oscar Wylee to publish information explaining its breaches of the Australian Consumer Law, and pay a contribution to the ACCC’s costs.